Can't decide where you
want to go?

Call our travel experts on

or enquire online below 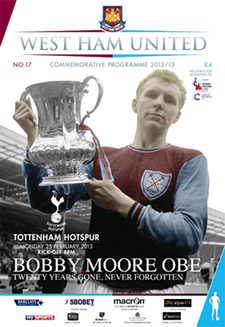 West Ham recently played Tottenham Hotspur in the Barclay’s Premier League. A game between these London rivals is normally not to be missed but this was even more special down to the fact that this particular game was a commemorative match honouring the late great Bobby Moore OBE. An England international and one of the finest centre backs of his generation, Bobby Moore sadly died of bowel cancer in 1993 aged just 51.

20 years later The Bobby Moore fund, which was founded by Bobby’s widow Stephanie, has helped raise millions of pounds for both research and also to help raise awareness for future generations.

Wristband Resorts has a strong history of getting involved with charitable organisations and we took this opportunity to lend our support to this most worthy of causes. As well as being match day sponsors for the game we also were given shirt signed by all the West Ham players which we intend to auction this year to raise as much money as we can for the fund.

It was an honour to be involved on such a special night, not just for fans of the two London teams, but for everyone in football. Bobby Moore was the first Englishman to lift a World Cup and as such deserves his place in the pantheon of great British players. Honoured with a statue at Wembley, it’s inscription says it all:

We salute Bobby and the good he did for English football as well as the continued influence his name and memory have on our lives as we strive to beat cancer for good.

Make sure you don’t miss out on the best deals!
Sign-up to receive our latest deals e-newsletter.